Farm Sanctuary had been mailing a June appeal about the plight of birds, but Avalon saw an opportunity to capitalize on Farm Sanctuary’s well-publicized and highly successful rescue efforts and spell out the need to build the reserve of funds to allow Farm Sanctuary to respond quickly when rescue opportunities, big or small, arise. Each animal that comes to Farm Sanctuary needs lifelong love and care (food, medications, etc.). By featuring animal stories, we knew we could lay out the case for ongoing support long after the rescues have occurred.

Our strategy was to ask existing Hilda Club ($1,000+) members to give at a higher rate to support this Fund. We used a closed-face carrier and Hilda Club branding (logo and language). The ask was focused on making a Hilda Club gift of $1,000 or more instead of just making a contribution based on the donor’s highest previous contribution.

The emergency rescue topic resonated much more than the traditional bird appeal. The response rate was more than double previous year, which drove 79% more revenue, and will help with member retention in the long run. And given the success of this package, we expanded the mailing universe to include $250+ members. 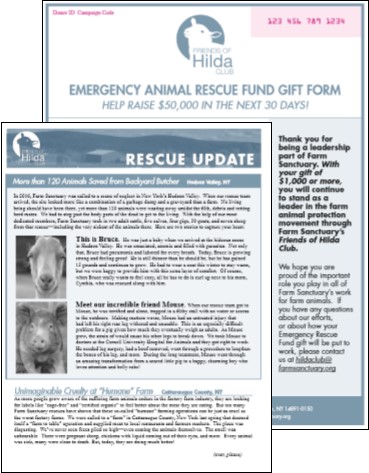