Cross-channel strategies are ideal, but they do not always work. We all know that surveys are great engagement strategies in direct mail and that sustainer invitations work best on the phone… but is that the only place they will work? Avalon challenged those assumptions for the League of Women Voters and for the National Museum of the American Indian and here are the results.

OBJECTIVE: The League of Women Voters needed to revitalize its online acquisition program by finding a new way to engage and acquire new donors. 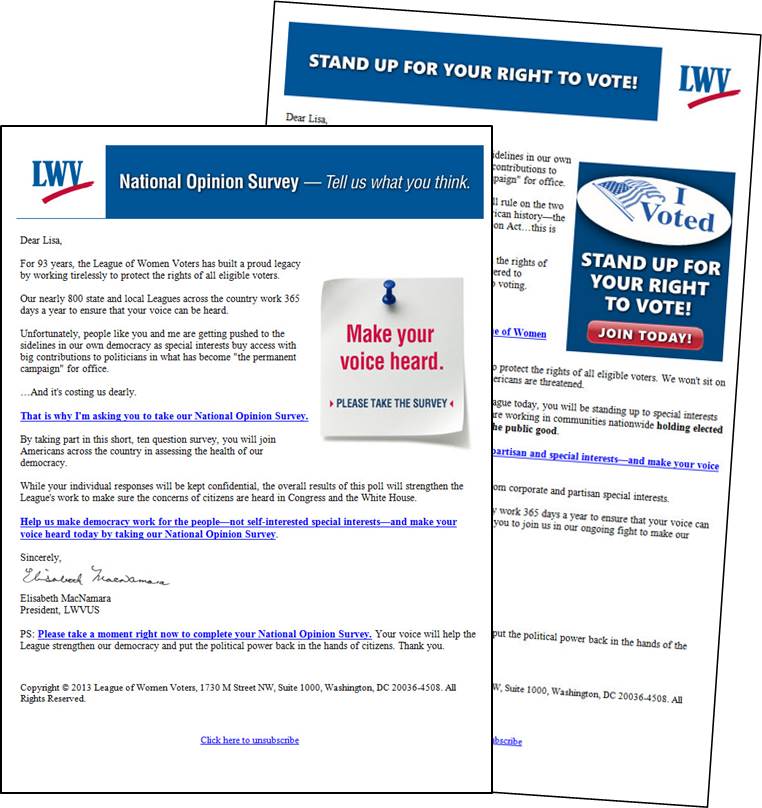 STRATEGY and AUDIENCE: Knowing how successfully the League had used a direct mail survey appeal, Avalon created an online version of the National Opinion Survey and follow-up email. The emails were sent to the League’s E-Activists, lapsed donors, and Care2-acquired lists. We deployed the emails in two phases: the first wave activated potential donors through the League’s fundamental voter protection messaging and asked recipients to make their voices heard by taking the League’s National Opinion Survey. The survey was concise, with ten questions that solicited constituents’ opinions on critical voter-protection issues. Once the survey was completed, the recipient was redirected to a confirmation page containing a thank you message with a soft ask.

Phase two of the email went to all recipients of the National Opinion Survey email, except for those who gave to the soft ask after the survey. We crafted this second wave with compelling messaging that discussed the dire state of voting rights today. The text detailed the League’s incredible track record of defending those rights nationwide for almost a century at both the local grassroots and national levels. Recipients were directly asked to join with the League in the fight to keep elections accessible to all citizens.

RESULTS: The results were amazing—more than 4,563 recipients completed the survey and 202 joined the League. This resulted in $6.56 net revenue per donor instead of the expected investment per donor. These results exceeded all expectations, as well as the previous fiscal year’s e-acquisition campaign, with a 169% higher click-through rate, 697% more gifts, and a 116% higher average gift.

The results for our Wellspring Society direct mail invitation for the National Museum of the American Indian were also impressive:

OBJECTIVE: NMAI needed to increase the number of monthly donors for its sustainer program, known as the Wellspring Society. While telemarketing is traditionally the best avenue for boosting sustainer rolls, this channel was maxed out for the year. NMAI and Avalon made the unusual move of creating a direct mail invitation.

STRATEGY AND AUDIENCE: A highly personalized direct mail package was developed to increase the membership of NMAI’s Wellspring Society. This #10 package was mailed to recently joined and multi-giving members, whose HPC was less than $100. We suggested a moderate-level ask string of $8, $10, $15, and $30 monthly. The messaging reinforced the Museum’s mission of telling the true Native story, and described the need to provide a sustainable source of revenue for the Museum and its mission to thrive. This copy was tied to the idea of a “wellspring,” which is a dependable and life-sustaining stream in the wilderness for Native peoples.

RESULTS: This campaign had an overall strong response rate of 0.74%, with a total of 53 new sustainers acquired with a healthy $11.94 monthly gift. This totaled $7,594 in additional revenue each year for the Museum. This response is a 61% increase, with 19 more new sustainers than the previous year, and net investment per donor decreased by 37%.