The Bottom Line: Re-tool Your Approach

Is it better to think out of the box or look toward tried-and-true? The answer is obviously both. Sometimes in order to take a fresh approach, you must upend conventional wisdom, while at other times, you must rifle through the tool box, resize ideas and make them work for you.

The following case study demonstrates how Avalon rethought a Chesapeake Bay Foundation campaign with results that paid off. And for another example, see our write-up of the National Museum of the American Indian’s groundbreaking Dispelling Stereotypes campaign.

With the goal of upgrading the Chesapeake Bay Foundation’s (CBF) higher-dollar direct marketing donors to an annual gift of $1,000, Avalon created a donor upgrade campaign packed with information and a genuine personal touch. 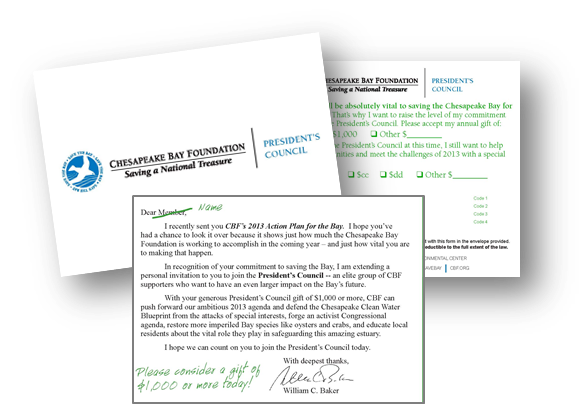 The package was designed to encourage existing higher-dollar donors to increase their annual support and invite them to join the elite President’s Council. As the basis for the invitation, Avalon developed a sophisticated presentation of CBF’s 2014 agenda to save the Bay. Coming on the heels of the release of the State of the Bay report, this appeal highlighted key findings and stressed the need to continue CBF’s efforts to save the Bay. By focusing on specific data and findings, the CBF Action Plan drew on the Bay’s real-time needs to solicit increased support.

This highly personalized, first-ever mailing ― which featured a two-page letter and a four-page Action Plan insert — was sent to members in an official UPS carrier to stand out in the mailbox and also ensure timely delivery. The upscale packaging underscored that the President’s Council is an important group of members whose generous support is deeply needed and profoundly recognized.

The invitation was sent to current CBF members with highest previous gifts of $500 or more in the past 0-36 months. There was a follow-up note card from CBF’s president, appealing directly to the need for the donor’s upgraded support. The card featured a personalized, handwritten note and signature, signaling to the donor how important his or her contribution is to the cause.

This new upgrade invitation performed exceptionally well, garnering seventeen $1,000 gifts (upgrades to the President’s Council) compared to four during the same period last year (a 325% increase!). The $485.08 average gift was not only the highest of the year, but also the highest in CBF’s entire direct mail appeal history.