In its third year, Giving Tuesday has grown into a true movement for giving around the world and serves as a counter to the spending-frenzy-induced days like Black Friday, Small Business Saturday, and Cyber Monday. Social media was abuzz with posts (check out this collection of the best posts from Giving Tuesday).

Many of our clients used Giving Tuesday as a springboard for their whole year-end giving campaign, not just Giving Tuesday; making sure their case for support was strong, relevant, and helped donors understand what their gifts could do. And this messaging will be supported by subsequent messages throughout December to motivate donors to give. Early returns show that a number of our clients saw increases over last year’s Giving Tuesday results, though some saw similar totals, and for still others it was their first time out. Many of our clients also saw increased traction on social media and collateral bumps in online revenue that may not be directly attributable to a Giving Tuesday link.

Unfortunately, many organizations’ emails I received were big on Giving Tuesday flash, but short on case for support. But with the uptick in awareness around the Giving Tuesday movement, maybe that’s something to test? My favorite tweet:

I fully support #GivingTuesday – but I do wish the hundreds of charitable orgs wanting my money were a bit more creative with their asks.

Regardless, corporate, civic, and charitable organizations really stepped it up this year. Huffington Post and Philanthropy Today were predicting totals in the $40-million range (an increase from last year’s approximately $21 million). And while Blackbaud is reporting $26.1 million raised through its platform, that’s still a 36% increase from what they saw last year. Network for Good is reporting over $4.5 million raised through its platform. And Crowdrise even developed an app that allowed donors to visualize their gifts (either via the app or via augmented reality) −as donations accumulate, the bricks show photos of donors and their chosen charities. The Chronicle of Philanthropy shows a total of $46 million raised, up from $28 million last year. 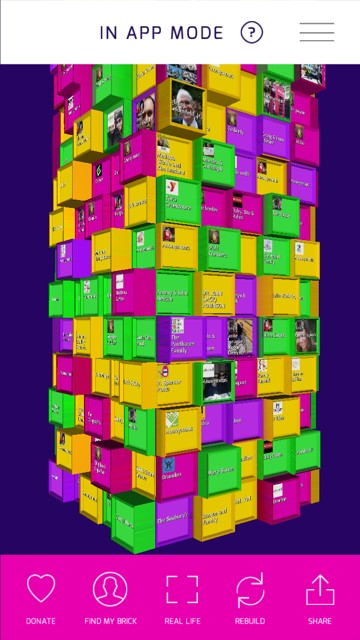 A few takeaways that are good practice for year-end (and year-round!) online fundraising:

·         Chance to win:  A handful of organizations were offering incentives (some for any donations, some only for new donors or just on this Giving Tuesday ).

·         Text messaging: A few organizations also send supporting/complementary text messages to back up their email asks like this one from Nature Conservancy.

·         Gifts that give back: There were a number of organizations offering symbolic gifts (i.e. Mercy Corps and Women for Women International were both promoting goats to help the people they serve earn a livelihood!). There were also a number of campaigns aimed at purchasing something that would benefit an organization: http://www.pinterest.com/thatscaring/holiday-gifts-that-give-back-2014-our-list-top-gif/

·         #Unselfies:  A carryover from previous Giving Tuesday celebrations, the #Unselfie trend continued, encouraging donors to show their support with an unselfie.

·         Thanking donors: Blackbaud gets it right by scheduling a “Thank you Wednesday” webinar sharing ways you can thank you donors and keep the spirit of giving beyond Giving Tuesday.