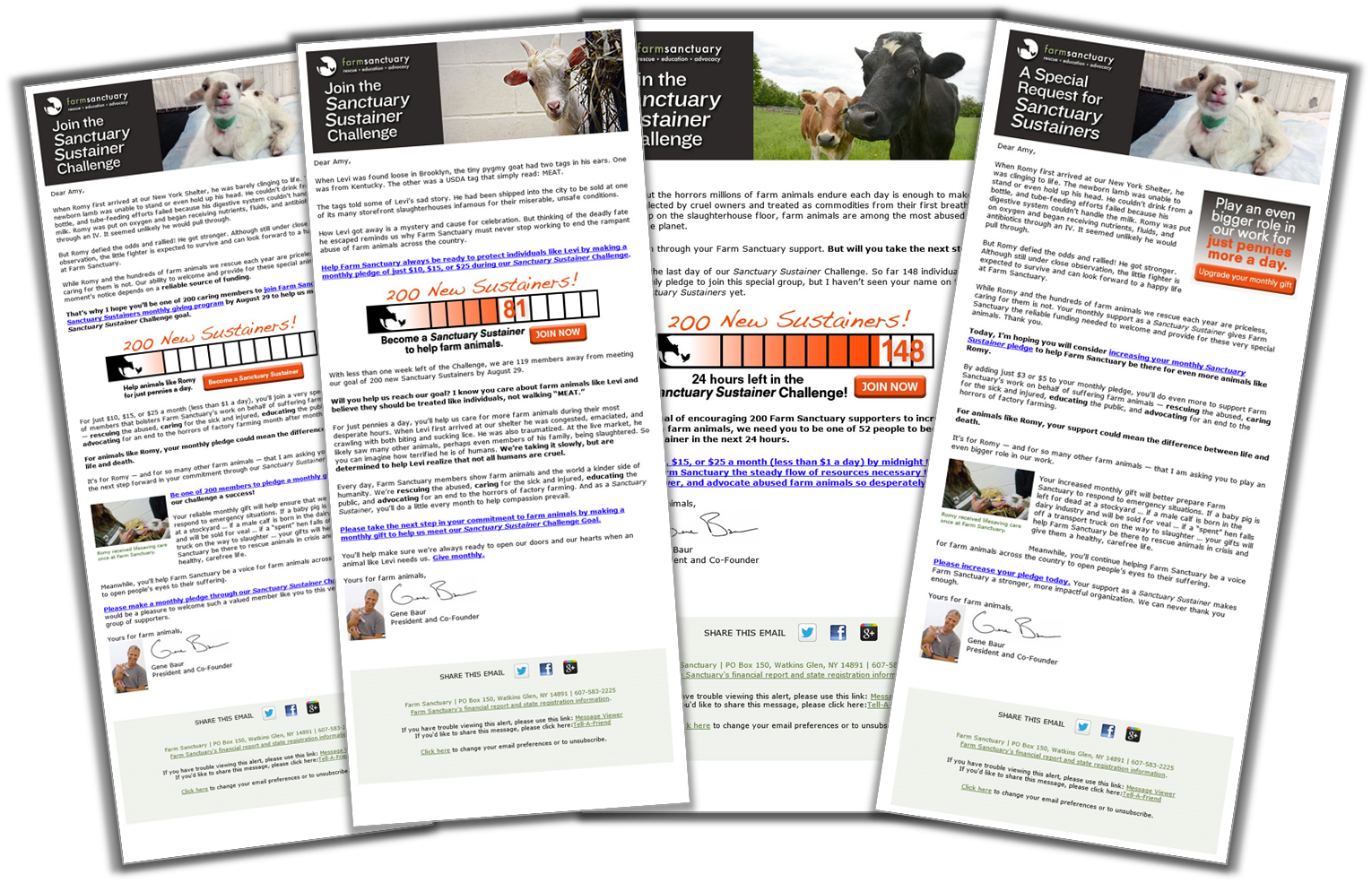 Given the long-term value and loyalty of monthly donors, sustainer recruitment and upgrading are crucial strategies for ensuring steady, reliable income. Traditionally, Avalon has found that telemarketing is the best way to recruit and upgrade sustainers, even though costs are high. But the less expensive digital approach we recently tested and honed for our client Farm Sanctuary has proven to be a real winner.

Objective: With ongoing pressure to increase revenue to fund more animal rescues and ongoing care for sanctuary residents, Farm Sanctuary sought to add 200 new monthly donors to its sustaining membership. Budget was a concern, given the high costs of telemarketing and/or mailing to recruit and upgrade monthly sustainers. To bring down expenses, Avalon created and deployed a multi-effort digital sustainer invitation campaign. Using its compelling case for ongoing support, Farm Sanctuary was able to build urgency and engage new sustainers.

Urgency was the primary call to action in the two-week, three-email series. The first email introduced readers to a newborn lamb, Romy, who had been clinging to life when he was brought to Farm Sanctuary. The email described Romy’s plight and recovery, as well as “…Farm Sanctuary’s work on behalf of suffering farm animals—rescuing the abused, caring for the sick and injured, educating the public, and advocating for an end to the horrors of factory farming month after month.”

We broke down the ask, explaining that sustainers’ monthly donations go further and help daily. And we emphasized the fact the smaller increments sustainers give over time—even as little as pennies a day—make a tremendous difference. Additionally, sustaining gifts provide a steady stream of critical revenue so Farm Sanctuary can better plan for and fulfill its mission.

The second email ramped up the urgency of reaching the goal of 200 new sustainers by the deadline; introduced readers to another rescued animal; and presented a thermometer-style progress report showing how many sustainers had joined since the first email. The third email was brief and to the point, highlighting the themes of the first two emails and urging supporters to put the campaign over the top by becoming a sustainer before the 24-hour deadline expired.

The campaign’s message was reinforced through other channels, with an ask in Farm Sanctuary’s monthly e-newsletter and on its home page.

The final component of this campaign was a sustainer upgrade segment. To bring down creative costs, we used a version of the first sustainer recruitment email and added a layer of back-end customer service to ensure quality control as Farm Sanctuary updated its data.