OBJECTIVE: The National Trust for Historic Preservation challenged Avalon to improve the performance of its online member acquisition efforts, which had flattened over time. NTHP was sending several single effort e-acquisitions each year, but it was not bringing in a significant number of new donors. Avalon branded a new campaign that could create urgency and engage more prospective donors. 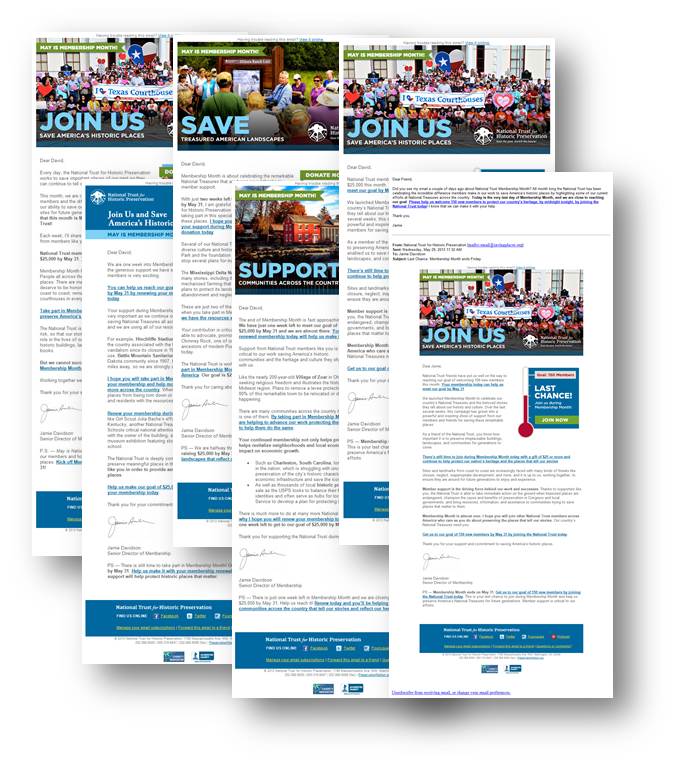 STRATEGY AND AUDIENCE: Membership Month was launched. This six-effort series included traditional membership messaging, while also introducing a month devoted to members and building on the base, with a goal of adding 150 new members. The copy and subject lines increased in urgency as the month progressed, and final emails included progress updates toward the goal.

Recipients of the Membership Month e-acquisition campaign were lapsed donors and non-donors with email addresses.

RESULTS: The Membership Month campaign significantly improved NTHP’s e-acquisition performance. Over the series, this campaign had a 0.04% response rate and a $38.49 average gift. The 331 new joins represented the highest number of new members from any e-campaign that year — even eclipsing a year-end multi-effort campaign that included a matching gift offer. The Membership Month strategy brought in 256% more new joins than all the single email efforts combined, while netting $37.05 per donor (in place of a budgeted investment per donor).