Objective: Not wanting to forgo the traditionally blockbuster holiday and year-end giving season because of NCMEC’s potentially sad message, Avalon designed a creative appeal that would honor the organization’s mission, while compelling donors to make a contribution. 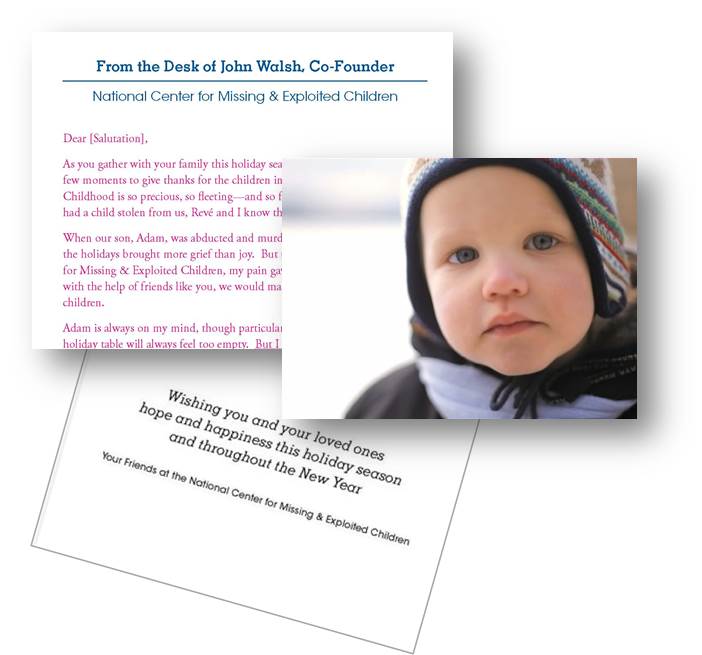 Strategy and Audience: Addressing a heart-rending topic – missing and exploited children – at a time when many people are joyously gathering with their families, can be a daunting challenge. Avalon’s creative approach was to appeal for donors’ help in making other families’ gatherings whole again. We developed the compelling narrative of an empty chair at the holiday table, to draw in the donors and express broken families’ need for support and compassion – without overpowering donors with the frightening thought of a missing child at holiday time. The letter explained that through donor support, NCMEC helps to make sure that thousands of those chairs are filled with safe, happy children celebrating the holidays with their families. This heartfelt message from NCMEC President John Walsh – along with the image of a vulnerable child – struck the perfect balance between despair and hope; loss and recovery; grief and celebration. The red carrier and real return address label added to the appeal’s personal feel. We mailed to NCMEC’s 0-12 month donors ($10-$999) and 13-24 month donors ($50-999).

Results: This holiday appeal produced the highest gross and net revenues in NCMEC’s donor program history, beating the previous highest grossing appeal by 19%! The response rate was 43% higher than the previous year’s November appeal, and the average gift was 19% higher. New joins had a response rate of 8.7%, and multi-year members responded at 12.47%. Even lapsed donors responded at 3.38%.

Strategy and Audience: In an effort to create an appeal to truly stand out in the mail, Avalon designed a mini-proposal, which included a personalized cover letter from NPCA’s president, a personalized proposal, reply memo, and RAE (held together with a paper clip for a hand-assembled feel), all inside a 9×12 UPS Mail Innovations carrier. Our overhauled messaging focused on NPCA’s critical and timely Land and Water Conservation Fund. In describing the Fund’s purpose, we highlighted NPCA’s mission of protecting our national parks by improving the health of the landscapes and waterscapes in which they are located – making a persuasive case for giving. We mailed the mini-proposal package to general members ($15-999.99) who had given in the past 18 months.